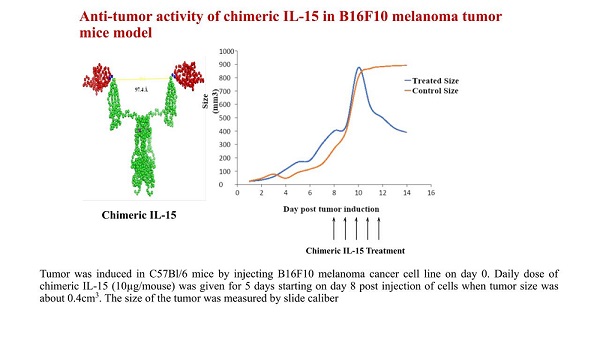 The immune response induced upon administration of antigens (during the natural infection or vaccination) provide protection to host from various diseases including cancer. While antibody is very important, CD8+ T cells play a critical role in ensuring protection to host from intracellular pathogens and cancer. However, generating these T cells by subunit vaccines and maintaining the same, called memory T cells, has been a challenge.

It is well established that cytokines play a crucial role in improving the T cell responses as well as inflammation and immune attack. Amongst cytokines, Interleukin-15 (IL-15) is known to maintain the T cells, generate the memory CD8+ T cells as well as reactivate the same during challenge making it an attractive biologics to treat cancer. Hence, IL-15 is found to be responsible for deciding the fate of memory CD8+ T cells.

In cancer immunotherapy, IL-15 has been hailed as a promising immuno-oncology drug and was ranked the top potential immunotherapy agent by the National Cancer Institute (NCI/NIH), USA. It has the potential to trigger a cancer-fighting immune response, but its performance in clinical trials has raised many issues. The challenge is to make IL-15 containing drugs which will be stable and long-lasting.

Dr Sarat Dalai, Professor, Institute of Science, Nirma University along with his team took this challenge and developed a novel recombinant IL-15-containing complex called “chimeric IL-15”. They have made it a highly stable biologics with > 40 hr serum half-life, Tm 78oC and dimeric in structure.

Department of Biotechnology (Basic Science Task Force), Government of India, has funded this project entitled “Development of Chimeric IL-15 to improve its bioavailability and efficacy”.

Primarily, it was found that this novel chimeric IL-15 is biologically active and able to augment the generation of memory T cells induced by model antigen, OVA in mice. Its anti-tumor activity is also giving promising results in mouse melanoma cancer models. This chimeric IL-15 can be used in vaccine formulation as an adjuvant to promote the generation of antigen-specific memory CD8+ T cells targeting intracellular pathogens and cancer. The team expects that the chimeric IL-15 itself or in combination with checkpoint inhibitors will be highly effective in treating various cancers. An Indian patent was filed for this invention and has been published (Indian Patent Application No. 201721010096A).