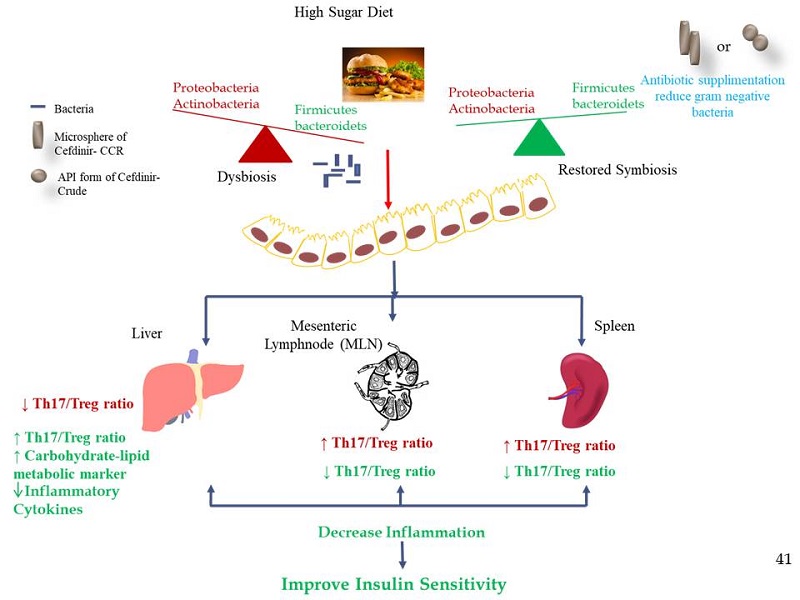 Type 2 Diabetes (T2D) is a lifestyle disorder, and its incidence is drastically increasing in the Indian population. International Diabetes Federation survey states that India is the second most vulnerable country with T2D risk.

The liver regulates the blood glucose level via insulin hormone in the human body. Due to active inflammation, liver cell receptors are not in a position to sense insulin which is known as insulin resistance, and this leads to an imbalance in the glucose levels. Since all the signalling pathways are closely linked hence, altering the metabolic pathway, and the presence of LPS activates immune cells. Microflora alteration in colon successively alters liver immune cells and also helps in regulating metabolism.

Similarly, a high intake of fats and carbs in the diet leads to an increase in the Gram-negative population. Thus, subsequently increasing Lipopolysaccharides (cell wall component of Gram-negative bacteria) in the blood. This eventually increases inflammation as well as insulin resistance. Hence, in T2D patient’s blood glucose remains high with a low level of inflammation. Prolonged conditions cause damage to liver, kidney and eye vision, etc.

It is an emerging idea to modulate gut microflora towards a healthy state to cure T2D. The research was carried out by Dr Sweta Patel, Laboratory Assistant at Institute of Science, Nirma University (ISNU), under the guidance of Dr Sriram Seshadri, Assistant Professor, ISNU. The study used Gram-negative microbiota, an antibiotic against gram-negative bacteria (here, Cefdinir). A microsphere formulation of the antibiotic was prepared to have a specific release of drug in a different region of the GI tract. Here, the targets were small intestine and colon as the digestion process happens here. The T2D pathogenesis was mimicked in an animal model with a preventive and treatment strategy.

In the study, a detailed analysis of bacterial alteration was done using a metagenomic approach. It is a step towards personalised medicine and nutrition to restore an individual’s ‘healthy microbiota’ in various metabolic disorder linked with altered gut bacteria. Here we have explored microbiota-focused therapy to treat disease. The results showed that the killing of Gram-negative bacteria reduced inflammation in the gut, liver, and improved the insulin sensitivity of the cells.

Thus, a conclusion arrived at was that the colonic bacteria are important bacteria and the target location to overcome T2D pathogenesis and improve insulin sensitivity. Increase the consumption of probiotics as it reduces the pathogenic bacterial growth in the gut. Also, a regular intake of a healthy diet can manage T2D condition, and adding probiotics to it helps in improving the gut microflora. In addition to that, the physical exercise will help in burning excess energy.